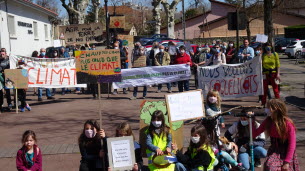 The March for the Climate, organized in 170 points of the national territory on Sunday, March 28, was broadcast in Montluel by the Bien Vivre en Montluel collective. With the closure of Lyon, people accustomed to demonstrating in the capital of the Gauls responded to the call of Anne-Emmanuelle Colin at the head of the collective.

Just before the start of the citizen march, on the Promenade des Tilleuls, he spoke about the climate emergency and the importance of defending the measures of the Citizen’s Climate Convention, created in 2019 to find ways to reduce emissions by 40% of greenhouse gases. by 2030.

Then, about fifty protesters, from the department, including a delegation from the Cotière citizen collective in transition from the municipalities of the Miribel community of municipalities, marched through the streets of the city center. Armed with banners, with good humor, they showed their attachment to working for climate change, maintaining biodiversity and solidarity.