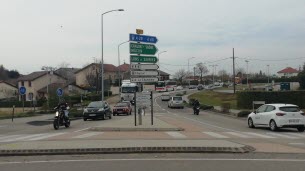 The repair will involve manholes and buffers in poor condition and will mean a drying time out of circulation of 72 hours.

A single traffic lane will be maintained on Avinguda de la Bresse in a north-south direction.

Transit traffic will be diverted from avenue de Trévoux (RD 936), to avenue de la Dombes (RD 117), then to avenue de Lyon (RD 1083) which crosses the city of Bourg-en-Bresse. The circulation of light vehicles will be diverted exclusively by the municipal roads of Saint-Denis. The following municipal roads will be closed to traffic: rue des Écoles and rue Prévert. Only residents will be able to use them in both directions. Leaving Chemin du Pré-Joli on Avenue de la Bresse will only be possible in the direction of the Viards roundabout, it is forbidden to turn left. The exit from Carrefour Market will be prohibited from avenue de la Bresse and will be from the Fruitière roundabout.

Chassieu. What if the Covid had been positive for cycling?