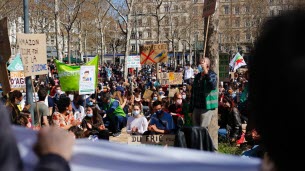 Greenpeace, Extinction Rebellion or Alternatiba: many associations and non-governmental organizations have called for demonstrations this Sunday in several cities in France, while the bill of “climate law” must be presented tomorrow to the National Assembly.

They ask for a “real climate law”, thus affirming that the government’s proposals are insufficient.

In Lyon, the meeting was set at 2 pm Place Lyautey (Lyon 6).

Around 2:30 pm, the square filled with people.

Frédérique, spokesperson for the Lyon Climat collective, organizer of the event (along with 13 other associations), denounces the unfulfilled promises. “They promised us ecological measures, but where are they? For example, the amendments to the ads were scrapped, which is outrageous. “

For Céline, a student, “this law is just a joke.”

For his part, Alexandre thinks that ecology is the forgotten topic of society.

The procession, which will be attended by the EELV mayor of the city Grégory Doucet, will take the Quai de Serbia, then up the Cours Lafayette.

The speeches are scheduled on arrival, at the Lyon Auditorium.

a label that certifies the club’s environmental commitment

A fishing school will open in the spring around the lake.

Loire. 200 people walk for the climate in Saint-Etienne: “There is urgency”

Community of municipalities of the valleys of Lyonnais. “To ensure that the amount of waste decreases”