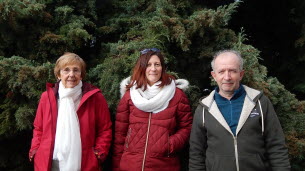 Her slim figure is now known at front row weather rallies, but at 84, Sylvette Perette still doesn’t like being put in front of her.

“Unless it is for a good cause”, jokes the environmental activist who is at the origin of the citizen collective “There is still time”, whose first meeting had taken place in his living room to organize the demonstration on Saturday, December 8, 2018. Of course, other demonstrations have followed, the most important of which drew up to 400 protesters in Dole.

The Facebook page of the Dolois collective has 500 members. But for a year, Sylvette Perrette has been nibbling a bit. “I don’t want to get into political debates because I am not sufficiently informed,” she admits. But anyway, we feel like it floats, good decisions will never be made. “

Not optimistic for the future

Obviously he followed the debates of the Citizens’ Climate Convention, but he is not optimistic. “The 150 members complain,” he says, “and harshly sanction the deficiencies of the Climate and Resilience bill that will be considered by the National Assembly. We are calling for a real Climate Law. There is an emergency, you know: the climate is accelerated, biodiversity is disappearing, we are in danger, other pandemics may arise from all these disturbances! “

With their friends, Fabienne Vaubourgeix and Christian Millet, also members of the “Il est encore temps” collective, they decided to organize a sit-in in front of the Jura sub-prefecture, on March 28, in Dole, while demonstrations will be organized. Almost everywhere in France, the bill is presented to the deputies the next day.

For Sylvette Perrette, it is important to show that we at Dole care about these issues and these events are an opportunity to meet and exchange ideas, especially with young people. In addition, it is to them that he addresses his invitation in particular: “Come in great numbers with posters. We are counting on you. You know how to make your voices heard. “