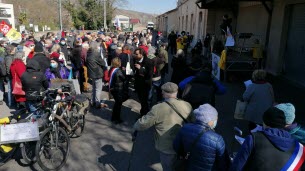 Lyon is not easy to get to from the small towns of Pilat Rhone. To get to their workplace, motorists face traffic jams in the department 1086 and on the A7 motorway. Those who take the train find saturated parking lots at the Givors or Saint-Clair-Les-Roches stations.

“The TER would be, not a story of the past, but a return to the future”

Then the idea arose to reopen the railway line on the right bank of the Rhône to travelers, as this line no longer carries many goods.

This is the overwhelming message that the hundreds of people gathered on Sunday, at 11 in the morning, wanted to transmit on the esplanade of the old Condrieu station.

“The TER would not be a story from the past, but a return to the future”, according to Serge Rault, mayor of Saint-Pierre-de-Bœuf, who during his speech insisted on the need to increase the collection points, to avoid large concentrations , places of traffic jams and tensions.

Many elected officials came to support the protesters.

Among the elected officials who came in solidarity with the future users of the trains on the right bank, we could note the presence of Cécile Cukierman, Senator of the Loire, Serge Rault, president of the commune community of Pilat Rhodanien and mayor of Saint-Pierre -de-Bœuf, Jean-Pierre Soleilland, deputy of Chuyer and many elected officials from the Rhone.