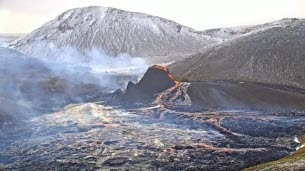 It hadn’t happened in 800 years. Mount Fagradalsfjall volcano, near Reykjavik, is erupting. On site, the show attracts thousands of onlookers, the most daring roast marshmallows and sausages on the tongue of molten lava.

But you don’t have to travel to Iceland to witness this impressive spectacle. Since this weekend, the Icelandic TV channel RUV has been broadcasting this eruption in real time. You can click directly on this link and admire the volcano live pouring its lava flows downstream.

“It is absolutely impressive”

Accessible in an hour and a half of walking from Reykjavik, the site where the volcano is located sees many people flocking.

“It’s absolutely impressive,” admits Úlvar Kári Jóhannsson, a 21-year-old engineer who spent his Sunday there. “It smells pretty bad, but what surprised me the most was the color orange: much deeper than you think,” he explains.

“It was mostly the temperature that surprised me: when we got close to the lava flowing on the ground, we took 10-15 ° C more and our foreheads were all red,” explains Émilie Saint. -Mleux, a French student who traveled from the capital with some friends.

Gushing out of a forming dome in a small valley that acts as a natural trap, lava collects in the basin, gradually turning basaltic black as it cools. The volcano has already released 300,000 cubic meters of lava, according to estimates by geophysicists, but the eruption does not present any danger, according to local authorities.

On the Reykjanes Peninsula where the eruption occurred, lava has not flowed for more than 800 years, and nearly nine centuries in this Krysuvik volcanic system.

In May, completion of the Chemin de Charvery works

Lyon. A woodcock seen on the slopes