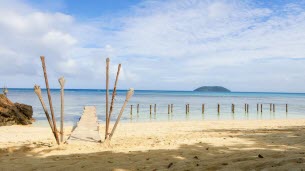 More than 5.7 million people attended the first episode of the new season of Koh-Lanta on Friday, broadcast on TF1. A program that surprised some viewers. In question: scenes of animal abuse, denounces Peta (People for the Ethical Treatment of Animals).

In a statement, the animal rights association explains having received several complaints from “outraged spectators” after the broadcast of the episode in which the candidates fish by throwing machetes at them, or even crushing them.

If one of the Koh-Lanta candidates’ goals is still to “survive” by finding food, Peta denounces “nauseating scenes.”

Looking to fish, one of the participants tries to attack a ray with a machete, which ends up clumsily throwing the animal, which manages to escape without us knowing if it has been injured. Later, he is seen hitting a brunette with a spear and then stepping on her, as she struggles and tries to bite him, footage that comes to the fore when played back in slow motion later in the show.

In addition to the barbaric behavior of Arnaud, said the candidate in this case of abuse, the association for the defense of animals accuses TF1 of having spread these scenes. “Torturing and killing animals on screen is an extremely immoral way of trying to attract viewers, especially at a time when respect for animals is increasingly important to everyone,” says Peta.

“In addition, it sends a harmful message to the youngest who see these cruel scenes that pose as entertainment,” adds the association. According to Le Parisien, 59% of viewers aged 4-14 have seen Koh-Lanta on Friday night.

A letter to TF1

After receiving complaints, Peta explains that he wrote to the general president of TF1, Gilles Pélisson, asking him to “implement an animal welfare policy.” And, in the future, stop showing those scenes on the show, broadcast in prime time.

“We hope that your group does not want its name to be permanently associated with the trivialization of cruelty towards innocent and vulnerable people,” the association said in its letter.

This is not the first time that Koh-Lanta candidates have been accused of cruelty to animals.

In Season 5, broadcast in 2005, Mohamed of the Yellow Tribe captured a wild goat that lived on the island. By catching it, he had injured the animal, which was expecting a baby. After Mohamed appeared threatening other candidates who did not wish to kill this goat to eat it, the Koh-Lanta production finally intervened and asked the adventurer to release the animal, which was about to give birth.

In 2019, the Red Tribe had captured a young shark in their nets. Then, the debate had raged among the adventurers, who had made the decision to release the fish.

New pollution in the Reyssouze

Pollution: the department on red alert