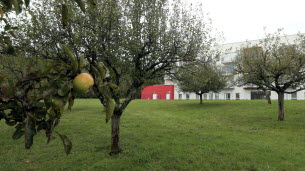 The initial observation is difficult: for many years, the fruit trees of our orchards have been gradually disappearing in Franche-Comté, as in all of France, mainly due to urban expansion. “The Thirty Glorious Years facilitated their abandonment, because it was an easy time to live in, so we no longer ” made ” gardens. Those who were in the seven hills of Besançon, for example, have “closed”, says Michel Froidevaux, president of the association of bisontine pomology.

Therefore, it carries out substantive work to contribute at its level to the conservation of the regional fruit heritage. “We offer in particular, when a virus is not involved, a tool sharpening session, training in planting operations, maintenance or grafting (Editor’s note: an arboriculture surgery) to ‘push the eyes’ which are performed in the spring between March and the end of April, with a quick result. »Meetings between partners, among the hundred that make up the association.

But the question of the disappearance of the orchards is also, and is a sign that things are changing, a little more political. “Many municipalities are trying to make municipal gardens, as in Chemaudin, Arguel or even in the Dijon region. They asked us for technical knowledge, because the Regional Council subsidizes the planting of fruit trees. […] There was a conscience. “

Alms. A thin layer of snow in Dole – watch out for ice!

Venous. Waste sorting in the Minguettes market: where are we?

Pilat Park. Recreating biodiversity with plantations of 9,000 trees and shrubs