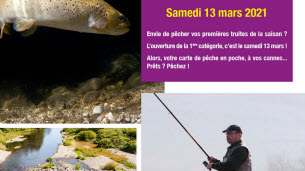 For several years now, the regional association of departmental federations for fisheries and the protection of aquatic environments in the Auvergne Rhône-Alpes region (ARPARA) has observed a significant decrease in pollution of the large rivers, in the Rhône and the Loire, while small streams degrade. Pollutant streams from purification stations, domestic waste, industrial and agricultural companies have been collected and processed, causing a drop in the concentration of pollutants in the water.

“On the Rhone, for example, La Turdine, which was a true open-air sewer, benefited from this vast decontamination program as did La Trambouze or the Furan in Saint-Étienne, as well as the main black spots in the region. . Although the presence of pesticides persists, the situation has improved for these large rivers where trout are more numerous ”, says Jean-Pierre Faure, technical director of the Rhône Fisheries Federation.

In Ain and Jura, same observation. “The various actors are aware of environmental problems and we are witnessing a decrease in the contamination of water courses. On the other hand, the constant increase in temperatures is worrying. Because certain species, such as trout, are in danger of extinction in hot water, “explains Aurélien Bornet from the Ain Fisheries Federation.” All rivers are affected by global warming. The most important rivers are the ones that produce the most fish, they are also the ones that lose the most. The cocktail of pollution and heat is very harmful “, testifies Medi El Bettah of the Jura fishing federation.

A return to biodiversity

Another testimony in favor of the environment, the Garon basin, in the Rhône, where 20 municipalities went to zero phyto between 2013 and 2017. Result: aquatic species that had disappeared from rivers, return to inhabit waterways thanks to a concentration of pesticides clearly decreasing.

“We have witnessed the return of many insects, little known to the general public, but which are first-order bioindicators, whose populations have been closely monitored by the University of Lyon I since 1993. In particular, the larvae of the plecoptera, of mayflies , dragonfly larvae, beetles and antlers… ”, explains Jean-Pierre Faure.

Less prey in the Yzeron and more fish in the water

Since 2006, the Rhône Fisheries Federation has also followed the restoration program of the Yzeron, whose morphology was unfavorable for fish populations, joining the spawning area (breeding area), a refuge, colder waters … The Yzeron it had ended up getting waterlogged. The organic matter stopped circulating and the waste settled at the bottom of the dying river. But since its removal, the oxygenation has gone well, the shelters and stones are accessible to the fish, which are now more numerous despite successive droughts ”, testifies Jean-Pierre Faure.

While some projects are heading in the right direction, the fight continues to preserve the region’s waterways and aquatic environments threatened by global warming. “With droughts the flow of rivers is reduced and the concentration of pollutants increases. Which is very harmful to fish. Degraded rivers degrade even faster. On the other hand, streams that have been improved are more resistant to scorching summers, ”he observes.

Hill reservoirs, too greedy in the water

For those who defend a reasoned use of water resources, mountain reservoirs exploited by farmers are a false good solution according to the different fishing federations, concerned about their proliferation. These structures built in the 1970s and 1980s, which are expensive and restrictive in terms of safety to install, are intended to store water. In theory, the reservoirs are filled during the winter with runoff water and then used in the summer in times of drought.

Many are no longer up to the task

The problem is that some are no longer exploited and many do not meet the standards. Because these reservoirs, which capture the water that supply streams, are often deprived of a downstream flow system. Summer rains that are essential for the survival of aquatic ecosystems are also captured. In addition, with high temperatures: the water evaporates even before being extracted and the one that remains rises to more than 30 ° C.

Exchange individual use for collective use

“In other words, species subjected to such temperatures do not survive,” laments Jean-Pierre Faure, technical director of the Rhône Fisheries Federation. And to add: “We are witnessing a kind of avalanche with an increasing impact on the resource and an increasing dependence on it. Water is becoming scarce, it will inevitably require more reasoned practice and less greedy crops, despite pressure from the agricultural world on the government that promises to build new reservoirs. Instead of having 10 small ones here and there for individual uses, it is better to have a bigger one and according to the norms that serve for collective use ”, points out the technical director.

Another cause for concern is the 2,000 micro hydroelectric plants, mostly owned by a few hundred people, who use the waterfalls of the old mills, for example, that they own, to produce electricity. However, the old buildings obstruct the waterways and oppose the natural elements of the river.

Taxes on the electricity bill

“Lobbying defends the interests of these owners, under the guise of green energy, but this is a false ecological argument. In addition, their production is not necessarily profitable, but is bought back at a preferential price established by law to cover their costs. This translates into a tax on our electricity bills ”, Jean-Pierre Faure from the Rhône Fisheries Federation.

“In the Jura we have about thirty of them that” artificialize “the water courses and put insurmountable obstacles for the fish. These projects arise while the flow of the rivers is less and less important. The owners of these micro-stations sell the idea to elected officials that the municipality will recover these equipment for free in 20-30 years. “But by then, water will be scarce and power plants will no longer be able to produce electricity,” laments Medi El Bettah of the Jura fisheries federation.

the Citizen Convention disappointed by the measures taken by the government

In England, this climber is afraid of nothing