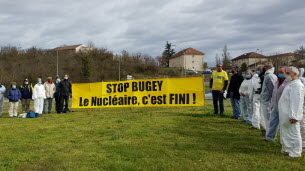 During the ten years of the Fukushima disaster in Japan, a score of activists from Sortir du nuclear Bugey and Stop Bugey occupied the aviation roundabout in Ambérieu-en-Bugey this Saturday morning. They put up many banners and wanted to alert the thousands of motorists passing through the area.

The group calls in particular for the closure of the Bugey nuclear power plant. “It is the oldest in France in activity. 40 years is enough, let’s stop before a big accident! », Declared Jean-Pierre Collet, secretary of the collective Sortir du nuclear Bugey.