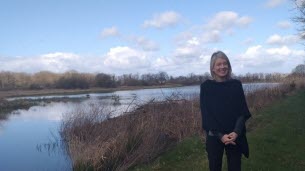 As part of the national biodiversity strategy in the Auvergne-Rhône-Alpes region, Bérangère Abba, Secretary of State for Biodiversity, was received in Ain on Friday 12 March.

At the initiative of the Community of Municipalities of Dombes, chaired by Isabelle Dubois, the Secretary of State was received by elected officials, partners and interested parties. As part of the preservation of biodiversity and its participation in the Natura 2000 commissions, the town of Marlieux was chosen for a presentation of the Dombes ponds, exceptional sites that constitute one of the largest freshwater areas in France. France and offering a diversity of animals and plant species.

It is in the middle of the Aubergères (15 hectares) and Denière (12 hectares) ponds, on the property of Jean-Paul Grandjean, mayor, operated by Eric Viallon and invested in various experiments (hedges, reeds, phytosanitary basin and nesting plots) The actions to protect the biodiversity of the Dombes were presented by the different actors to the Minister.

For the AuRA region, it is the official announcement of the allocation of a first financing for concrete actions, with selection of projects and “to offer the maximum of means in record time”, in favor of water and biodiversity, at the rate of 19 million euros.

Closure of the recycling center this Thursday