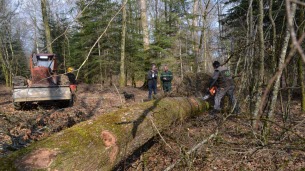 In recent months, some municipalities in Jura have mobilized to help rebuild the framework of Notre-Dame de Paris. It caught fire on April 15, 2019.

The most recent is the municipality of La Barre. On the morning of Monday 8 March, he commissioned the forestry company of Stéphane Rebillet a logging contract in the La Barre cuts for the construction of the Notre-Dame de Paris framework, in the presence of Philippe Gimbert, mayor of La Barre. and the guard of the National Forestry Office (ONF) Montenont. In the cuts of plots 23 and 24, five oaks (about 10 m 3) were molded and slid. They had been uprooted during the last storm.

A few weeks ago, we reported that seven villages gave up their oaks for Notre-Dame de Paris: Blois-sur-Seille, Séligney, Tavaux, Gendrey, la Barre, Montholier and Montmirey-la-Ville. These were joined by the municipalities of Mont-sous-Vaudrey and Fraisans. On March 3, in Mont-sous-Vaudrey, Sylvain Chatelain, a specialist at Le Villey, cut down the 250-plus tree listed, over 120 years old. The Fraisans commune, for its part, proposed 8 m³ of oak and completed a file with the National Forestry Office (ONF).

In fact, the ONF is responsible for choosing the wood, because it must meet certain criteria. The cut is the responsibility of the municipality. Transport then sawn to France bois forêt. An oak tree, depending on its size and age, represents a value of € 500 to € 800.

Trees must be cut by Sunday March 15 to allow time to dry. They must also be cut before the sap rises back up into the trees, a phenomenon that takes place at the end of winter, that is, at the end of March. The spire of Notre-Dame de Paris should be rebuilt by 2024.