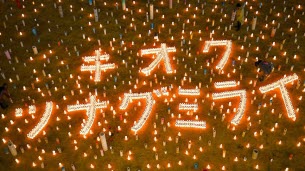 Japan celebrated the tenth anniversary of the triple disaster of March 11, 2011 with emotion on Thursday. An earthquake and tsunami followed by a serious nuclear accident have permanently traumatized the entire nation. At 2:46 pm, when the earthquake struck ten years ago, a minute of silence was observed across the country. Sirens sounded at the same time on the coastal beaches where people gathered with their hands together as they looked out to sea. Tributes were held throughout the day in northeastern Japan, such as Hisanohama, in the city. Iwaki coast, in the department of Fukushima, where the locals gathered near the sea, to the sound of the prayers of Buddhist monks.