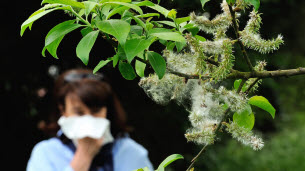 As spring approaches, the number of people vaccinated against Covid-19 continues to increase in France. But with the arrival of sunny days, the virus could benefit from an unexpected ally: pollen.

This is the observation made by biologists from the Technical University of Munich, Germany, who analyzed the correlation between the number of Covid-19 contaminations and the pollen rate in the air. The results of their study were published in the scientific journal PNAS.

By studying pollen concentrations in 31 countries from February 27 to April 3, 2020, the researchers showed that the presence of these seeds released by flowering plants “potentially increased coronavirus infections by 10-30%. “.

In areas that were not contained, the scientists noted that “an increase of 100 pollen particles per cubic meter was equivalent to a 4% higher infection rate,” explains the Swiss newspaper Le Temps, which has detected the German study. This rate increases to 2% if the region has been confined but increases dramatically in areas where there are many trees that release large amounts of pollen, such as hazelnuts.

How to explain this correlation?

How do pollens make us more vulnerable to Covid-19? It’s simple: when a virus enters the body through the nose, our body will generate proteins that will alert our cells asking them to defend themselves. But when particles like pollen are also inhaled and land on the nasal walls, they will inhibit, or at least in part, the antiviral response of our nasal cells.

In fact, the body will defend itself less against a virus if a person inhales these microscopic seeds. The risk increases as pollen concentrations increase.

Furthermore, the Munich researchers estimate in PNAS that “the effects of pollen” in Covid-19 infections “affect the entire population”, not just people allergic to these microscopic seeds. However, they note, the risks may be “more pronounced in people with allergies, asthma or patients prone to chronic rhinosinusitis due to their weaker antiviral response.”

A simple gesture: wear a mask.

However, the study does not pretend to be alarmist. The researchers say that other environmental factors, such as temperature, must be taken into account when studying the increase in Covid-19 infections in a territory.

In addition, exposure to pollen during the spring period can be limited with a simple gesture. “To avoid future waves of high virus transmissions during periods in which ‘favorable’ environmental factors are combined (…) it is recommended to wear masks during the spring,” the researchers explain.