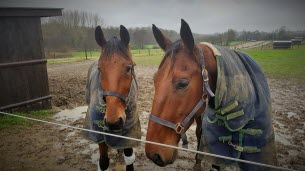 In early March, the French network for epidemiological surveillance of equine pathology (Respe) issued an alert about a virulent epidemic of equine rhinopneumonia. A very contagious, dangerous and potentially fatal virus for horses. Several outbreaks have already been identified in France. To combat the spread of this epidemic, all equine competitions, courses or meetings in the territory have been suspended. Explanations

An epidemic from Spain

The first signs of this epidemic appeared at the end of February, during an international equine competition in Valencia, Spain. Several hundred horses and their riders participated. Some animals developed a strong fever there that spread rapidly. While many infected horses are still confined in Valencia, others have returned bringing the virus with them.

Thus, several outbreaks have been confirmed in France in stables where horses recently returned from Spain live. These are the departments of Calvados, Haute-Savoie, Hérault and Seine-et-Marne. Other clusters are being investigated, specifies the French network for epidemiological surveillance in equine pathology in a press release.

A contagious virus, which attacks the neurological system.

In France, horses infected with this rhinopneumonia “show mainly respiratory symptoms, or only hyperthermia”, explains Respe. However, this infection is very dangerous for horses and, in the most severe cases, can be fatal.

This myeloencephalitis, or HVE1, commonly known as rhinopneumonia, causes a high fever in horses. It can cause breathing difficulties or cause abortions in pregnant mares. But in its most severe form, this virus causes neurological symptoms in infected horses. The latter can suffer from engine problems, such as Rahotep from Tuscany, a 15-year-old horse and gold medalist with Philippe Rozier in Rio at the 2016 Olympics.

The animal contracted this pneumonia in Valencia in February. Asked by RMC, his rider explained that the horse “rose to a fever of 40” once the fever had subsided, “he was not feeling well, he was walking with his hindquarters blocked.”

Worse still, horses can find themselves lying down in the face of the virulence of the infection and crushing their muscles once on the ground. “If they stay too long on the ground, there is a crushing of the muscles, more blood circulates, it is necrosis,” explains a veterinarian to RMC. “And the more time passes, the harder it is to catch up.”

This epidemic is all the more worrying as the virus is extremely contagious: a simple nose-to-nose contact between horses is sufficient. Although they cannot be infected, humans can also be vectors for this rhinopneumonia that affects horses, donkeys and ponies.

What solutions to fight the virus?

The measures to combat this virus are very similar to those used to deal with Covid-19. In stables where outbreaks have been identified, horses are confined to avoid mixing of animals, as L’Est Républicain points out.

As franceinfo explains, it is also possible to test animals by inserting a swab into their nostrils or by taking a blood test.

There is also a vaccine against HVE1 and boosters should be given every six months. However, vaccination of horses against this disease is not mandatory. And, as for the flu or even Covid-19, it is not effective in 100% of cases.

Respe specifies that to date, no infected horse has died in France. “Some animals have developed neurological signs, but so far no deaths have been reported in the area.” In Valencia, where many animals and their horsemen are still confined, ten animals have already died, specifies the Spanish newspaper La Vanguardia.

To curb the epidemic, the FFE, together with the Société Hippique Française and the International Equestrian Federation, suspended all competitions, as well as courses and meetings of equines under its tutelage in France, until March 28 inclusive.

In a press release, the FEE also requested, on March 3, the medical repatriation of the French horses that remained stranded in Spain. “It is impossible for the FFE to abandon its troops. Therefore, we request the Minister of Agriculture to intervene immediately with his counterpart to authorize the urgent medical repatriation of our horses, in accordance with a strict sanitary protocol. In France, they will be isolated in the best conditions to receive adequate treatment ”, writes Sophie Dubourg, national technical director of the FFE.

The horse world, which is already suffering the full weight of the Covid-19 health crisis, “must now face this epidemic that has just brutally hit certain French and foreign horses that compete in Europe”, alarms the French Equestrian Federation (FFE).

Several other European countries, such as Belgium and Luxembourg, have also confirmed several cases of pneumonia caused by this equipment in their territory.

Dième rejects the wind turbine project in the Brou forest

A hundred storks stop in the village