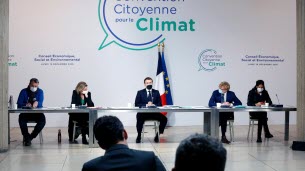 The parliamentary battle begins: the deputies begin this Monday in committee the examination of the emblematic climate bill. About 5,000 amendments are on the menu of the special committee that will work on this sensitive text for two weeks, before it reaches the floor at the end of March.

Inspired by the proposals of the Citizen Climate Convention (CCC), the 69 articles affect many areas: consumption, housing, transportation –with the prohibition of certain national airlines in case of alternatives of less than 2h30 by train–, food, or even environmental justice creating a crime of “ecocide”.

Another bill is added, on the menu in the hemicycle from Tuesday to Thursday, to include environmental protection in the Constitution, via referendum.

The work of the Citizens’ Convention “unraveled”

Thanks to the climate law, one of the last great texts of the five-year period, the government wants to make “credible” the goal of reducing greenhouse gas emissions by 40% in 2030 compared to 1990. But the executive is in disagreement with the Citizen Convention, which accuses her of “unraveling” her work, among the “three jokers” brandished by Emmanuel Macron (including the 110 km / h on the highway thus discarded) and the revised measures.

Last Sunday, for its final session, the Convention harshly judged the government’s translation of its proposals, with scores well below average. “There is no decline in ambition,” defended the Minister of Ecological Transition Barbara Pompili, who intends, however, to favor “effective” and “better accepted” measures by sectors such as air transport, “affected” by the health crisis. .

Former EELV, the minister must assume the arbitrations of the government and save the balance of the majority, divided between a liberal wing and a more “ecologically compatible” fringe.

Prime Minister Jean Castex also assures that he is not “in the field of conservatism”: “we do not have an Ayatolian approach but we want to move the lines.” The government also wants to avoid the cacophony of ten days ago about meatless menus in school cafeterias. The debate will also resurface in the food section of the bill, which provides for the experimentation of a daily vegetarian menu in the dining rooms of the volunteer communities.

Co-rapporteur Célia de Lavergne (LREM) hopes to “reestablish a bit of tranquility” and is pushing to go beyond this simple experiment.

Some “walkers” would also like stricter measures on general thermal renovation of homes or oversight of advertising, while the text bans advertising for fossil fuels only. Environmental NGOs are very critical, such as Greenpeace, which criticizes “green washing” and repainted an Air France plane in Roissy on Friday, or the Nicolas Hulot Foundation, which fears a “lost five-year term for ecology.”

To the left too, disappointment

The left intends to convey its disappointment. “Three-quarters of the measures” of the Citizens’ Convention have “been abandoned or diluted,” denounces Mathilde Panot (LFI). The bill “sounds hollow”, believes the socialist Guillaume Garot, who promises “concrete proposals” such as “the prohibition of advertising the fattiest and sweetest products.” Former LREM and close to Nicolas Hulot Matthieu Orphelin also intends to defend the Convention’s proposals such as “compulsory comprehensive rehabilitation of housing”, with financial aid.

Most, for their part, praise its entire ecological record, which is based on the “articulation” of various laws, including the anti-waste one adopted in early 2020, and the impact of French climate diplomacy. “We will not achieve our objectives without the European scale, in carbon taxation of course, but also in the standards that Europe can impose on car manufacturers”, underlines the president of the special committee Laurence Maillart-Méhaignerie (LREM).

The deputies are aware of the numerous resistance that arose among industrialists, even for certain measures among local elected officials.

On the LR side, Damien Abad wants to bring “a right-wing ecology, based more on bonuses than penalties.” His party intends to build its own software on the subject, one of the key themes of the 2022 presidential elections.

Two composters have been installed in the town

Riorges. 10,000 salmon eggs deposited in the Beaulieu park incubator to populate the Loire

the Liberty shelter wants to save the children from the slaughterhouse