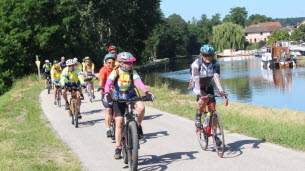 The Ministry of Transport will support three “cycling continuity” projects in Roannais, announces Deputy Nathalie Sarles (LREM) in a press release, without indicating the amount of aid they will benefit from. It involves the creation of a 1.3 km route between Renaison and Saint-André-d’Apchon, the development of a 450 m section of the greenway at Pouilly-sous-Charlieu. And the creation of a 9.5 km greenway on an old railway line (via Perreux) in the territory of Charlieu-Belmont.

The deputy appreciates “the state support for these local projects. This is both a recognition for the elected officials who have chosen to promote the development of cycling in the region, and also materializes the state’s support for local initiatives. The financing of these projects is part of the bicycle plan endowed with 400 million euros announced by the government.

The latter launched 194 projects and 155 communities across the country were selected for a total of 101 million euros during the last call for projects. As a reminder, there has been a 27% increase in bike lanes since 2017.