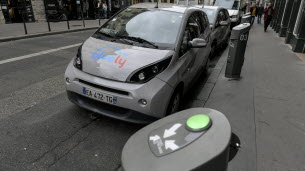 The Bluely carsharing service infrastructures are given new life as part of the development of a charging service for electric and hybrid cars by Izivia Grand Lyon, Demeter partner. Intended to equip the 59 municipalities of the metropolis of Lyon, this network, which already has 55 operating stations, is densifying thanks to the acquisition of 80 stations with 4 seats, which will provide a universal recharging service. Among them, a certain number will be equipped with much faster charging stations.

Recall that on August 31, 2020, the Bluely shared electric cars had disappeared from the scene, having closed the Bolloré group company due to lack of profitability. The Lyonnais had discovered them in 2013, the year of their installation.

The goal, by the end of 2021, is to create 200 stations, or 750 places to charge your vehicle. These will be available to individuals and professionals through the Izivia Pass available at grandlyon.izivia.com, as well as with recharge cards from other operators. Note that existing stations range from 3 to 7 kW for faster recharging.