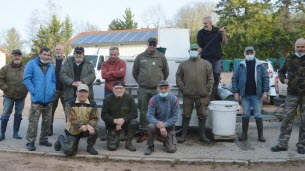 This Tuesday morning, faithful to their customs and gathered from Pouilly-les-Nonains, the trout fishermen of Roannais released trout in the three rivers in their area, the Renaison, the Teysonne and the Isable. Cumulatively throughout the year, 360 kg of salmonids (fario) will have reached the water courses, coming from the Ferrières-sur-Sichon fish farm.

Just before the opening on March 13, an additional 30 kg of rainbow trout will be released in the Urbise.

The association’s general assembly is scheduled for March 6 at Lake Cornillon (2:30 pm, outdoors). The election of a new board of directors will follow, with current president Jean Fayard having decided to end his terms.