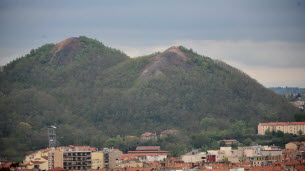 Unlike other French mining operations, the mines of the Saint-Etienne basin are located in the heart of cities. The development of mining in the Loire is closely related to urbanization and urban development.

As a reminder, it was in 1983 that underground mining was stopped and in 1993 that of open pit mining.

If we superimpose the map on this Google Maps image, taken before Steel’s production (whose main gallery now sits just above Decathlon), we can see that the entire district is built on mines. And that many collapses have already been observed …

Mining hazards in the department

➤ The localized collapse (called fontis) that results from the collapse of cavities near the surface, resulting in the creation of a small diameter crater.
➤ Settlement: recompaction of a loose mass, resulting in small-scale earth movement on the surface.
➤ Slope slippage or movement, which results from the instability of the slopes of the mining deposits.
➤ Heating, tied to old coal slag heaps made from combustible materials or other oxidizable materials.

Other phenomena can appear near old operations, such as floods, mine gas, water and soil contamination.

work to stop the flow in the weir