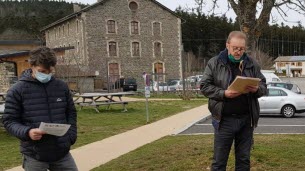 On February 23, four associations (France Nature Environnement 43, France Nature Environnement Auvergne-Rhône-Alpes, National Federation of Transport User Associations, SOS Loire-Vivante) appeared before the Clermont-Ferrand administrative court after having submitted a summary suspension to stop, which began in early January, on the future route of the Le Pertuis / Saint-Hostien detour. The court issued its decision the next day and dismissed the request. The environmental defense associations have decided not to stop there and continue the fight in court. Now it is the Council of State that will be sent before March 23.

A deviation that “cannot be justified”

“Four short lines were enough to order the rejection of our application, we are not given any reason. The State and the Region, the contracting body, brought the judge only arguments that were too light, even fallacious, ”develop the representatives of the associations. “It’s a fun way to do justice,” continues Colette Chambonnet, Vice President of SOS Loire-Vivante.

All deplore, once again, a detour, as presented, which is not justified “with a traffic that is not considerable.” They are 14,000 vehicles / day, that is to say, the same traffic as the crossing of the Loire in Bas-en-Basset, in a department “, alleges Pierre Pommarel, spokesman for Fnaut.

There is also no justification in terms of road safety “with a single fatal accident in 10 years that is not due to the state of the road.” In addition, they explain that they have not “moved by the duplication of the 2X2 tracks between Yssingeaux and Bessamorel. We had studied the archive when the project was announced. On this stretch of road, accidents are numerous. And to report too many lies: “They told us in the administrative court that the work had finished on February 12. But this is not true, on the 23rd there were still some left. So yeah, it wasn’t a carnage, it was a skid! “

A call for donations to fund legal costs

Reasons among others that pushed them to take the Council of State. “The AT decision did not discourage us and strengthens our motivation and our fighting spirit. They are also asking for donations to help finance legal expenses, which are around 6,000 euros because we have to hire a lawyer approved by the Council of State. Our economic resources are limited, unlike those of the State and the Region, which use taxpayers’ money ”, concludes Jean-Jacques Orfeuvre, vice president of the FNE 43.

The municipality distributes the garbage bags