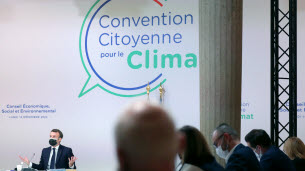 Government measures inspired by the work of the Citizen Climate Convention (CCC) will not achieve the goal of reducing greenhouse gas emissions, citizens met this Sunday in their last session.

They were asked to assess, on a scale of zero to ten, whether government decisions would allow them to “get closer to the goal of reducing greenhouse gas emissions by at least 40% by now. 2030, in a spirit of social justice.” . Most of the citizens present said no, with an average score of 2.5 out of 10.

“Why the president did not want to take our opinion into account, I do not know, participatory democracy is made to listen to the people,” Mathieu lamented this Sunday morning (citizens are designated only by their first name).

An answer to the yellow vests

Emmanuel Macron had decided to create the CCC at the end of the yellow vest crisis, born out of a carbon tax on fuels perceived as unfair. Its mission: to propose measures that allow “reducing greenhouse gas emissions by at least 40% (compared to 1990) by 2030 in a spirit of social justice.”

Launched in October 2019, the CCC presented in June, at the end of a calendar disrupted by Covid, 149 proposals to the President of the Republic, who rejected three of them and promised to transmit the others “without a filter.”

Many citizens felt that this commitment had not been fulfilled and had distorted the outcome of their work. “We ended up with two projects. We will use ours, the government will use theirs, I think it’s a shame, ”said William, for example.

The government has 75 measures implemented and 71 in the process of implementation. Some have found a place in the recovery plan or budget, others in decrees and a quarantine in the Climate and Resilience bill, which will be debated in the Assembly at the end of March.

The High Council for severe weather too

But environmental activists point to the scrapped measures and lowered ambitions of many others.

And the Higher Climate Council criticized the recovery plan, the energy renovation of the buildings and finally the climate law, also severely judged by other bodies.