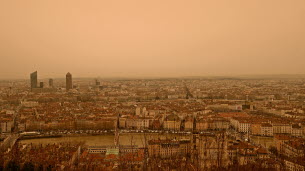 “The Bourgogne-Franche-Comté region is affected these days by a significant increase in the levels of PM10 particles (fine particles) in the atmosphere,” says the Atmo agency, in charge of monitoring air quality, in a press release. .

At the origin of this situation are unusual effects such as the heat in this season and the dust of the Sahara. “This situation is favored by relatively stable climatic conditions, and linked to mixed origins, such as emissions from domestic heating, still active despite spring conditions, and the contribution of Saharan dust”, confirms the Atmo agency.

Seasonal reasons also explain the phenomenon. “The agricultural sector is also starting to spread it with good weather. This generates ammonium nitrate fumes that are transformed into secondary particles ”, also points out Hélène Tissot, project director of the Atmo agency.

The agency explains that on Wednesday in some parts of the Alps the information and recommendation threshold for sensitive people (50 g / m3 / d) was crossed. “This situation must continue and the concentrations of particles remain high, which justifies the triggering, for this Thursday and Friday, of a persistence alert procedure,” adds Atmo.

Individual heating with auxiliary wood (fireplaces, stoves, etc.) is prohibited in Ain and in the two regions of Savoy and measures have also been taken to limit speed on the main roads.

The Atmo network recalls that it is recommended, during these episodes, to limit emissions from automobiles, industries, crafts and homes, favor short trips, reduce intense physical and sports activities.

At the beginning of February, the winds from the Sahara had already caused the contamination of sand dust in our region.