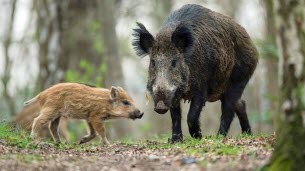 These are difficult images that Hugo Clément revealed this Wednesday. In a video posted on Facebook and Twitter by the journalist specializing in animal and environmental issues, we can see a group of hunters on the edge of a forest. In their midst is a wild boar, which seems to be seeking contact with humans. While the animal shows no signs of aggression, it is brutally shot in the head by one of the hunters, which appears to kill it instantly.

These images were revealed for Hugo Clément’s Sur Le Front program, broadcast by France.tv Slash. The report, entitled Animals poached in a private park, gives the floor to Alain Martin, owner of the Monceau estate in Liverdy-en-Brie, in Seine-et-Marne, where the images of the slaughtered wild boar were filmed.

The subject tells us that the wild boar had been domesticated from an early age by Alain Martin, and that it was called Hercules. “He followed me everywhere, I brought him up with a bottle,” says the park owner sadly, photos that support him. “It is an animal that I loved.”

Commenting on the images of his boar’s death to France.tv Slash, Alain Martin explains that Hercules was obviously asking the hunters for “hugs” when they killed him. “It’s very hard … He was ten months old, he was beautiful (…) He wasn’t just an animal, he was my baby,” he said.

“Shooting animals and letting them suffer is barbaric”

If the owner of this private park testifies today, after the poaching of his wild boar, it is because he wishes to denounce the behavior of hunters who have entered his domain for several years to kill their animals. “They did not ask for anything, they are happy,” laments Alain Martín, who explains that the hunters do not hesitate to enter by cutting the fences that he has installed to protect their fallow deer, deer and wild boar.

In this report, Alain Martin also reveals many photos of animals injured by hunters, such as Biniou, his deer killed after being shot in the shoulder. This rebels the owner of the park, who explains that he cares about his animals with whom he lives “on a daily basis.”

“There is no hunting, Alain Martin deplores. There, it is free. Shooting the animals, letting them suffer, is barbarism!”, Assures the owner of the park, who today calls’ hui sanctions against hunters who break into their domain illegally. “There are many offenses to report,” he said, adding that he would like “the person who killed Hercules to be convicted.” “That is what I would like,” he concludes.

Environment / Site Contribution The Conversation. Is buying shorts better for the environment?

Haute-Loire. An electric charging station has been installed in Bas-en-Basset