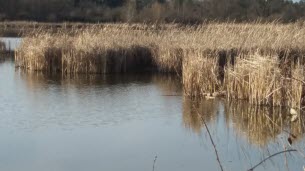 With 12 hectares of water surface in a total site of 24 hectares, it is a place that is home to one of the largest colonies of laughing gulls in Europe, from 3,000 to 5,000 pairs depending on the year, although this last decade we could notice a sharp drop.

The Craintilleux site is protected by a prefectural biotope protection decree that prohibits the entry of people, particularly during the period from March 15 to August 1.

About twenty other species of birds nest there.

If the laughing gull is the largest and most spectacular of the species present in the pond, there are around twenty birds that breed more. Among them, species of heritage interest such as the northern shoveler, the common pochard, the mustached tern, the black-necked grebe, the grebe, the laughing gull, the rufous net, the turdoid warbler.

But more famous species were also recorded, the mallard, the chipeau duck, the Eurasian coot, the common moorhen among 84 species of birds and 16 species of dragonflies.

A show for walkers at the Chemin des mouettes

If the site, private property, any intrusion is prohibited. However, an observatory allows walkers to see the life of the birds, without disturbing them.

Located at the end of the Chemin des mouettes, it is a typical place that favors the stopover of families who stroll it. The panels explain the life of the laughing gulls and the history of the pond, whose creation dates back to the Middle Ages.

The imminent arrival of the birds, which with their cries will awaken the pond of Ronze, will thus constitute an unavoidable curiosity until July.