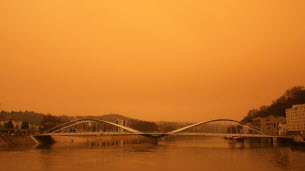 The week will start under a yellow light! The phenomenon observed two weeks before, will return from Monday and just as impressive. South winds have something to do with this as they will bring sand dust from the Sahara into the air, giving this yellowish appearance.

Same consequences as the previous time: afterwards the dust will fall to the ground. But this time it is not raining, since the sun has appeared meanwhile. “The phenomenon will last more slowly on Tuesday and the sky should clear by Wednesday,” said Christophe Mertz, forecaster for MétéoNews.

Temperatures will drop slightly from Thursday

Temperatures will remain above normal for the next few days, making this last week of February feel like spring. “The climate will be generally dry throughout the Rhone region. Between Monday and Wednesday, temperatures will continue to be very mild, “says the specialist.

Despite a gentle but sensitive south wind, the sun is determined to shine for a while longer. “Wednesday will be the sunniest day of the week, with temperatures reaching 17 degrees. It is from Thursday that the heat will subside a bit, the flow from the south will fade slightly.

Sainte-Eugénie: the garden landscaping completed in autumn at Montbrison

Why does it matter. The inclusion in the Constitution of the protection of the environment considered in the Assembly

Swear. Logging on horseback is making a comeback in a small town in the north of the Jura