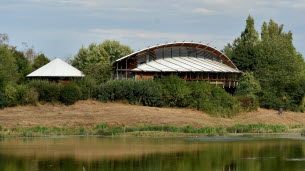 For several years, the Ecopole du Forez has been in great financial difficulties. This dates back to 2016 when the Auvergne Rhône-Alpes region cut the subsidy of € 127,000 for this 760-hectare nature reserve located on the banks of the Loire in Chambéon.

The same year, so that Frapna could continue managing the site, the city of Saint-Etienne awarded an exceptional grant of 50,000 euros.

This lifeline is no longer sufficient, especially since the arrival of the Covid-19 epidemic. In fact, the Ecopole du Forez has been closed to the public since March 2020.

However, the inputs constitute an important part of the income of the site currently managed by France Nature Environment (FNE ex-Frapna). Christophe Dumas, director of the FNE, underlines “that 100,000 euros are needed to operate the site.” Out of place.

“A call for donations to try to ensure their survival”

To try to generate money, France Nature Environment has launched an appeal for donations from the general public. By mid-February, a little over 24,000 euros had already been raised on the Hello asso platform. The goal is to reach 50,000 euros.

Meanwhile, the socialist group of the regional council of Auvergne Rhône-Alpes will present an amendment, during the plenary assembly on February 23 and 24, to “safeguard the Ecopole du Forez”.

This will be defended by the PS councilor of the Loire, Johann Césa. In the explanatory memorandum it is recalled that “this structure is forced to launch a call for donations to try to ensure its survival. There are still 50,000 euros to go. Unprecedented situation when we know that the region has just paid a subsidy of 850,000 euros to hunters ”.

In the amendment, the PS proposes, “given its great utility in favor of environmental conservation, to allocate a subsidy of 127,000 euros to the Ecopole du Forez, that is to say to return to the level of the subsidy assigned to Frapna Loire, which manages this site with own funds ”.