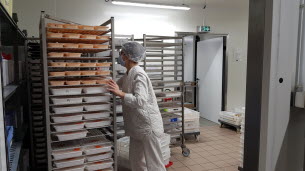 “The Minister of Agriculture and Food and the Minister of the Interior are camped in a political position in defense of factory farming. They unnecessarily reinforce the polarization of the debate between “meat” and “without meat” “, denounces Laure Ducos, director of agricultural and food campaign of Greenpeace France after the controversy, this weekend, around the establishment of unique menus without meat in the dishes for schoolchildren in Lyon, to “streamline” and “speed up” the dining room service.

And to justify: “Several studies have shown that it is children from disadvantaged families who consume poorer quality meat. The introduction of balanced vegetarian menus in mass catering is therefore an important measure in terms of public health and social justice. What ministers are struggling to recognize is that the introduction of vegetarian menus is not only a necessity in terms of climate and health, but is also a beneficial measure for French producers and breeders. Studies show that among the cities most committed to organic, those that invest the most in vegetarian menus are also those that invest the most in organic and local meats. “