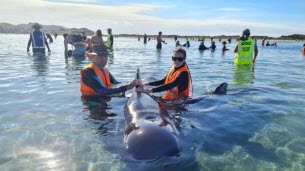 Several dozen pilot dolphins stranded. The New Zealand authorities mobilize this Monday to try to save these mammals, trapped in a coastal barrier at the north end of the South Island. This is a place where groups of pilot whales often bathe.

The Department of Conservation (DOC) said the 49 mammals were discovered Monday morning at Farewell Spit, a spit of sand 90 kilometers north of the city of Nelson.

At least nine pilot whales have been found dead. About 60 people are trying to prevent others from arriving in the hope that they can regain the sea with the tide, the DOC said. “Specialists in marine mammals will participate in the refloating operations and their care on the beach, trying to keep them in an environment of freshness and humidity,” said a DOC spokesman.

Lots of ground connections at this location

Farewell Spit is a 26 kilometer long spit of sand that juts out into Golden Bay. It has been the scene of around ten cases of group strandings of pilot whales during the last 15 years. As of February 2017, nearly 700 of these mammals had been stranded at Farewell Spit, including 250 that had died.

There is no safe scientific explanation for this phenomenon.

There are hypotheses about diseases, navigation errors, the presence of predators, extreme weather conditions or problems related to the topography of certain places. But others involve human activity and, in particular, disturbances generated by high-frequency sonars.