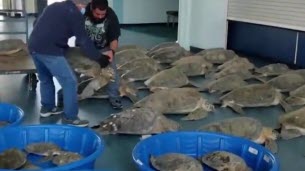 Snow in Alabama, freezing temperatures in Texas and record snowfall in the Midwest … For several days, the United States has been hit by an exceptional cold snap, from Illinois to Texas. The human toll of these extreme weather conditions rose further Wednesday to at least thirty deaths nationwide. Not to mention the three victims and the dozen injured affected by the tornadoes that struck North Carolina on Monday and the millions of homes still without power.

But this North American cold snap is also hitting animals, wild or in captivity, particularly in Texas in the southern United States, where freezing temperatures are the exception.

In recent days, thousands of sea turtles paralyzed by the water temperature have washed up around South Padre Island in southern Texas, where the mercury still did not exceed 10 ° C Thursday. Some 4,700 turtles were rescued by volunteers, Reuters notes. Thanks to these volunteers, these thousands of animals were taken to a convention center to be able to warm up before being released once the weather became warmer again.

Thousands of ‘cold-stunned’ sea turtles were rescued off the South Texas coast when temperatures dropped amid a winter storm in the state https://t.co/mvm51tmiDe pic.twitter.com/9DxrWiN30w

Helping the volunteers was a matter of life and death for these reptiles, who fall into a lethargic state and become unable to move normally when the temperature in their environment drops abnormally, the director of the convention center told Reuters. welcome to the sea turtles.

My mom is retired and spends her winters volunteering at a sea turtle rescue center in South Texas. The cold snap stuns the local turtles and they are doing many rescues. Today he sent me this photo of the back of his Subaru. They are turtles * literally * all the way down. pic.twitter.com/xaDRNjLDoQ

Typically, “only” 100 to 500 turtles are stranded each year in South Texas, reports Wendy Knight, a volunteer with Sea Turtle Inc., a sea turtle conservation center, to the US news agency. But the rescue of almost 5,000 specimens in just a few days “is unheard of,” he says.

Also in Texas, 300 miles north of South Padre Island, freezing temperatures had even more dramatic consequences for the animals at a San Antonio sanctuary. Hit like millions of Texas homes by a power outage since Monday morning, the establishment was forced to witness the death of many of its residents, including primates, freezing to death, explains the US channel CNN.

Among the victims are, in particular, Violette, a 58-year-old chimpanzee, several other monkeys, some lemurs and a large number of tropical birds, specifies the Primively Primates sanctuary on its website. After these deaths, Brooke Chávez, director of the park, made the decision to evacuate the animals that could be from the sanctuary. But not everyone was able to leave the scene, she told the San Antonio Express News, and she and her team had to make decisions. “I have never faced a decision like this: decide who we are going to save based on our chances of catching them,” laments Brooke Chávez, whose office has been turned “into a morgue.”

Chimpanzees at the sanctuary, difficult to transport, are among the remaining animals. But in a statement dated Wednesday, Primively Primates explained that thanks to donations, electricity generators could finally be installed to heat the primates, which are closely monitored.

The sanctuary director adds that the final assessment of the number of dead animals can only be made at the end of the cold snap.

It is forbidden to leave your dog outside when it is very cold.

Extreme weather conditions are also affecting pets in Texas, especially livestock, farmers confirm to Reuters who have witnessed the death of some of their animals, especially newborns, in recent days due to the cold.

As for pets, a law in the state of Texas also strictly prohibits leaving dogs outside when temperatures drop below zero degrees, recalls the Houston Chronicle. A threshold widely exceeded these in Austin, for example, where -12 ° C was recorded on Tuesday. An unscrupulous owner who leaves his pet outside during the cold snap faces fines of several hundred dollars.

A necessary reminder when the mercury should stay low through Friday. The cold Arctic air mass is beginning to clear, but freezing temperatures are expected to remain and “remain 11-19.5 ° C below seasonal norms” in the central United States, according to the National Weather Service (New South Wales).

Rudeness: a wild waste dump discovered in the city