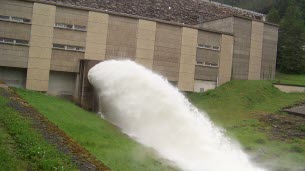 On Monday, February 22, between 9 a.m. and noon, the Dorlay level is likely to rise very sharply and significantly.

However, no floods were announced, this rise in torrent level is due to a test of the drainage valve of the Dorlay dam, upstream from La-Terrasse-sur-Dorlay.

The client (Saint-Étienne-Métropole) and the operator (La Stéphanoise des eaux) will carry out an in-depth inspection of the dam’s emptying units. These are tests and trials during which the flow rate of the drain valve can reach 12 m³ per second, or 12,000 liters. A strong momentary flow, bearable by the bed of the watercourse but which will cause a sudden increase in the water that is felt until the confluence with the Gier and in the flow downstream of the latter.

Therefore, local residents are asked to be vigilant and do not approach the banks.

The municipality seeks to prosper by saving water