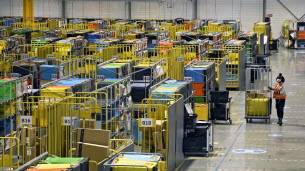 The collective “Plus Jamais That! ”Du Rhône, which brings together various actors and various associations involved in social struggles, such as ATTAC Rhône, the peasant confederation or even the local group OXFAM France, appealed to elected officials in eastern Lyon in a letter.

Your request? That politicians are opposed to the project to build the new Amazon warehouse near the Saint-Exupéry airport. This new building, which would be located in the town of Colombier-Saugnieu, and for which the construction permit is being studied before the administrative court, would be a 160,000 m² colossus where Amazon’s goods would be stored before being ordered.

This giant hangar could have “deleterious effects on the economic, social and environmental plans, in its district and much beyond”, the group warns in its letter.

It also highlights that “it is recognized that each job created in Amazon destroys up to 4.5 others in the traditional commerce of the United States” or that the tranquility of the residents could be strongly impacted by an increase in the traffic of heavy goods.

“The world dreamed of by Amazon is in total contradiction with the deep desire for a dignified life on a habitable planet. »Finally, denounce the associations.