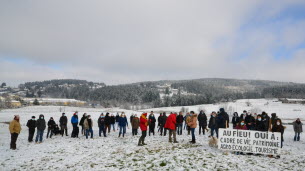 More than 70 people, opposed to the project to expand the Fieu industrial zone, gathered on Saturday morning at the site for the installation of a sign stating their concerns.

It was written: “In Fieu, yes to: living environment, heritage, agroecology, tourism. This meeting was also the opportunity to announce the affiliation of the members of the Collectif du Fieu to the Citizen Observatory of the Plateau, an association created in 2008 whose objective is to ensure respect for the general interest and respect for democracy on the part of the elected officials of the Plateau of Vivarais-Lignon.

By taking the Druids circuit, which runs through much of the terrain that constitutes the extension of the Fieu area, the participants located the site of an underground granite structure, accessible in a total length of 17.50 m, which is protected by the Heritage Code.

In accordance with the legislation on preventive archeology, before any development project, an archaeological diagnosis must be carried out on the entire plot in question. In addition, according to members of the Plateau Citizen Observatory, “before any work on this plot, a complete excavation of all the underground networks will be imposed on the developer for a minimum cost of 100,000 euros.”

During this meeting, the participants were able to notice several more or less important rivers that cross the earth.

Two composters have been installed in the town