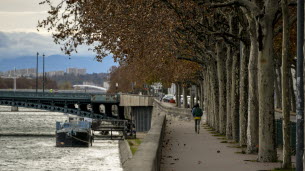 The weather is fickle in mid-February. After the snow, followed by the cold wave, it is the wind that makes its appearance on the Rhone. If it has already started to blow this Sunday, Météo France places the department on yellow surveillance “strong winds” from this Monday morning, at 9 in the morning and until at least 4 in the afternoon. Isère is also concerned about this yellow surveillance.

Infoclimat foresees gusts of up to 70 km / h in the early hours of the morning. At 5:00 p.m. this Sunday, the wind was already reaching 33 km / h at the Lyon-Bron station.

And on the side of temperature?

Temperatures will be more pleasant at the beginning of the week, with 8 ° C expected on Monday afternoon and up to 12 ° C on Tuesday.