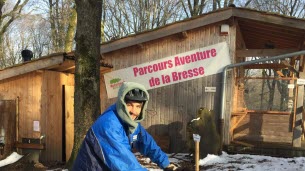 Alric works at Parcours aventure in Saint-Étienne-du-Bois. The park receives around 10,000 customers a year, plus 5,000 in groups and school trips when possible. “This morning I came to work with my electric bike. I live in Aromas, 25 kilometers away and it took me an hour. The temperature was five degrees below zero, but the cold didn’t bother me. You just need to dress appropriately. “

“The bicycle was bought by my employer. I brought this as a wish. We took a look at the prices, what we both had to earn by making this purchase through the company. “

The bicycle costs 1,800 euros, VAT included. “Afterwards, it is in the values ​​of the company to try to be as eco-responsible as possible, to be interested in energy costs. Instead of being limited by having only one car, my main motivation is pleasure. The bicycle has always been part of my life since I was little, to go see friends or to go to school. “

While he does not deny that there is fatigue, he does not call it unpleasant. “I’d also say it clears your mind. Concern for the planet is also very important. My goal is to do as few kilometers as possible with my car. “

“Cycling has always been part of my life since childhood”

According to several European surveys, those who go to work by electric bicycle live an average of twelve kilometers from their workplace. Like Alric, his main motivation is physical and mental well-being, but also the environment and the climate. In heavy rain, two-thirds of cyclists keep getting their bikes out. But unlike Alric, most cyclists ride in cities, on congested roads, and don’t feel safe when there is no bike path.

When cyclists are asked what their company could do to promote cycling, they dare not dream of functional bicycles. They would especially like a financial boost to buy their own bicycle. However, since January 1, the law allows companies to pay up to 500 euros a year – without social charges – to employees who come to work by bicycle. This formula is called a sustainable mobility package. “If I am lucky enough to benefit from it and buy an electric bicycle, I will be reimbursed in four years. Almost as good as a functional bike. “

I brought this as a wish. We took a look at the prices, what we both had to earn by making this purchase through the company.

Metropolis of Lyon. Trees, urban forests and climate: how to plant and where?

Rainwater will be fully captured in the Chemin de la Passerelle