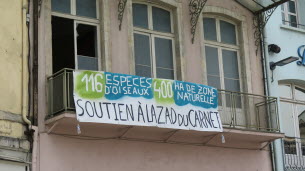 On Saturday morning, February 13, passers-by could see a banner in support of the ZAD (area to be defended) of the Carnet displayed on the balcony of an abandoned apartment, the Place de la Liberté in Lons-le-Saunier. Ile du Carnet is an island in the Loire estuary.

The Carnet area, occupied since the end of August, is threatened with eviction. Its defenders oppose the concreting of a natural and humid area where 116 protected species live. The large seaport of Nantes Saint-Nazaire wants to build an industrial estate there.

On their website, the Zadists explain that the Carnet project is part of one of 78 “turnkey government” sites.

“In January 2020, the government introduced a program of ‘turnkey’ sites offered to manufacturers. […] The objective is clear: to allow companies to be installed in less than 6 months to reindustrialize France on a large scale ”, detail the Zadistas.