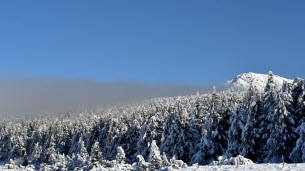 A fall of the snow cover is observed at medium height (below 1500 m). This is the case everywhere in the Alps and the Massif Central.

Climate projections, reported and compiled by the Regional Observatory of Climate, Air and Energy (ORCAE), indicate that, “under the assumption of an increase in the average temperature of + 2 ° C, the number of days with snow on the ground it would decrease in a month at 1,500 m altitude, from 5 to 4 months in the Northern Alps. The thickness of the snow cover would be reduced by 40 cm.

At 1,200 m, the snow cover would be very low and the conditions for winter sports would no longer be met.

Above 2,500 m, snowfall would be slightly delayed, melt a little faster (12 days less snowfall) and we would see a slight decrease in the thickness of the snow cover ”.

According to the readings made at the Météo France automated reference station for this parameter, located at an altitude of 1325m in Col-de-Porte in Chartreuse (Isère), the Regional Observatory for Climate Air and Energy recorded, for example, a decrease of 31% (-33 cm) during the winter season between 1961 and 2020, going from an average of 105 cm of snow depth between 1961-1990 to an average of 72 cm between 1991 and 2020.

In Chamonix, the loss of snow depth averages 18 cm over 60 years. At this measuring station, winters with little snow are more numerous in the most recent climatic period and the snowiest winters are mainly in the previous climatic period. The decrease in the average number of snow days (> = 30 cm of snow on the ground) is 40%.

In Haute-Maurienne en Bessans, if the measurement indicates -11 cm of snow, the number of days with snow decreased on average only by 5% between 196-1990 and 1991-2020, which is not significant. The same is true for Vercors, in Autrans, which loses 9 cm of snow on average during the period and in the Massif Central de Mont-Dore / Sancy with 4 cm of average snow loss.

Climate change is a major problem for mountain areas, as it causes a decrease in the natural snow cover, especially at low altitude, and also acts on the production of artificial snow, which can only work in specific climatic conditions.

Two recent studies published in Scientific Reports tend to show that artificial snow will help maintain the snow conditions necessary for the operation of winter sports resorts in the first half of the 21st century. These studies were carried out by the National Center for Meteorological Research (CNRM, Météo-France / CNRS) and Irstea Grenoble, on the evolution of the snow cover in 129 winter sports stations in the Alps and Pyrenees during the 21st century.

By 2100, in the case of strong greenhouse gas emissions, the reduction in average winter thickness could reach 80 to 90%, with a very limited duration of the snow cover and a snow cover that normally does not exist in the middle mountain.

Beyond the strict winter period, climate change will also have an increasing impact on water resources in summer. The snow cover in the mountains has the function of a “water tower”. By gradually melting during spring and summer, when rainfall is lower and demand is higher, it maintains the flow of rivers.