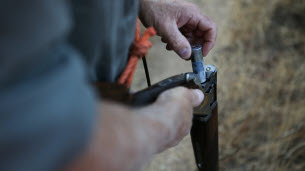 The socialist mayor of Montpellier, Michaël Delafosse, announced this Thursday that he wanted to terminate the hunting agreements on all the lands of the town to guarantee “the safety of walkers and the tranquility of the inhabitants.”

A first completion on a piece of land located in a district in the east of the city, at the end of December had already awakened the clamor of the hunters and mayors of small towns in the metropolis headed by Michaël Delafosse. To which he replied: “It is a space for runners, families, on Saturdays people get married there and they don’t have to hear gunshots.”

“Each mayor on this delicate issue is sovereign, it is not an inter-municipal competition,” recalled the mayor who defines himself as a “socialist, very green” mayor. Elected in 2020 to head the city of almost 300,000 inhabitants after an alliance for the second round with EELV, Michaël Delafosse also has an elected member of the Animalist Party on his team. The measure that corresponds to a campaign commitment is already in force at this stage in 70 hectares.

“For the safety of walkers, for the tranquility of the inhabitants, we cannot allow the hunting of birds and rabbits to take place”, justifies the mayor of Montpellier. “I am one of those who deplore the dramatic hunting accidents and one may have the feeling that hunters, posing as biodiversity regulators, must nevertheless wonder about these tragedies of the injured or deceased.”

The mayor of the seventh largest city in France also invokes ethical reasons: “Personally, I believe that today there are other forms of leisure and that animal welfare is also an issue.”

In the region of Occitania where Montpellier is located, hunting traditionally carries significant social and political weight. But its practice is increasingly challenged, even in rural areas, by residents and walkers. They consider that this activity threatens their safety and is not sufficiently regulated, in particular with regard to the distance of the shots to the houses.