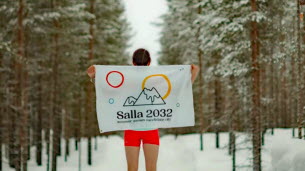 In Salla, an isolated town of about 3,500 inhabitants immersed in the far north and self-proclaimed “the coldest place in Finland”, the thermometer shows negative temperatures half the year.

“I’ve never felt hot before, but I’m sure it will come,” jokes a resident in a bid video that has gone viral. In this clip, participants say that if climate change is not taken seriously, the snow-covered Lappish tundra will soon become a beach volleyball court and the frozen river an ideal location for surfing competitions.

On its application site, the city is also ironic when introducing its mascot. It is a reindeer called “Kesä” (“summer” in Finnish), infested with mosquitoes, increasingly present in the Arctic due to rising temperatures.

“It has helped people to understand that here in the Arctic Circle we have living conditions that need winters, if we lose our winters it creates many problems for us and for the entire planet,” he continues.

Save Salla, save the planet

Scientists say the Arctic is warming twice as fast as the world average, a danger to local wildlife and also poses a serious risk to permafrost, which contains immense volumes of CO2.

The action, supported by the ‘Fridays for Future’ climate movement, urges people to take action, from retraining to volunteering to lobbying parliamentarians. We hope that our small campaign to Save Salla, save the planet will invite more people to think and act in favor of the climate ”, hopes the councilor.

In Lapland, where tourism was a major source of income before the arrival of Covid-19, local authorities are pressing the government to restore an old railway line that allows visitors to reach the region by greener means.

“We don’t want to be the best place to host the Summer Games in 2032,” he explains. “We want to keep Salla and the planet as it is now.”