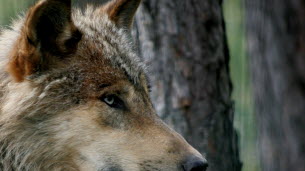 One of the four gray wolves that escaped in late January from an animal park in the Eastern Pyrenees was found dead on a private estate in Salses, and another remains untraceable.

“Agents from the French Bureau of Biodiversity (OFB) and the park owner have clearly identified” that it was one of the six wolves that arrived from Estonia in late January to Ecozonia, the prefecture said on Tuesday.

On January 25, the day after the arrival of six wolves from the Riga Zoological Park, “excessive behavior was observed in several of them, which caused a degradation of the wire enclosure allowing the escape of four individuals despite the intervention of the healer who was bitten in the forearm and evacuated, “Ecozonia explains on its Facebook page. Three days later, two wolves were shot” because they presented a serious danger, “continued the statement from the new 26-hectare animal park focused on predatory animals, which was due to open in February.

Last week, one of the two wolves that made it out of the park site was “probably injured” by the gunshot of an OFB agent, “but it is still too early to determine if he was’ this is the one who was found dead. “said the prefecture.