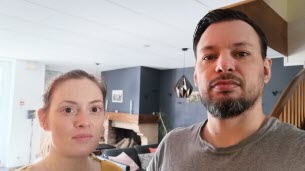 On Friday, February 5, the Regional Health Agency warned the Montagnieu town hall that the water from the network was not suitable for consumption. Elected officials had very little time to alert the population and organize a distribution of water bottles to attend to the most urgent.

On social media, Géraldine Burtin is delighted with this “reactivity” while others are concerned about the consequences: “How long will this last? Can we know the elements of analysis? »Asks Isabelle Pecora.

“It is an organization”

While waiting for the results of the next analyzes that will take place on Monday, the inhabitants organize themselves: for Damien and Virginie Rodi, from the Rolland restaurant, who prepare take away meals.

“It is an organization, but if we do the hot preparations, we boil the water. Ice cubes cannot be used for cooling, luckily we have a blast chiller. But given the relatively few orders at the beginning of the year, it’s manageable. If we had been open it would have been more complicated. “