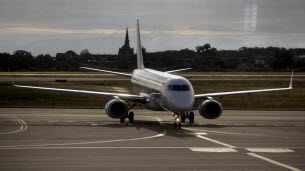 Is it a good idea to eliminate French domestic flights to reduce CO2 emissions?

In any case, this is what Greenpeace France defends, which published a report on January 21 entitled “Aviation: preventing the relaunch of short flights”.

“An aberration”, according to the NGO. This report establishes the connections that emit the most CO2 in France in 2020, in particular when aviation activities are resumed after the first lockdown. It also indicates which domestic trips can be made differently from the plane.

Thus, for a Paris-Lyon trip, there is an alternative by train in less than 2h30. The same goes for a Lyon-Marseille.

Alternatives whose impact is reflected in figures: a total of 38,000 tonnes of carbon dioxide were emitted for the Paris-Lyon connections in 2019, according to Greenpeace. A traveler making this trip would emit 65.7 kg of CO2, compared to a single kilogram by train.

Hence the “embarrassment of taking the plane” (“flygskam” in Swedish), an expression popularized in particular by Greta Thunberg.

In Lyon, members of Greenpeace mobilized to raise awareness about air traffic regulation.

🌍✈️ To aspire to achieve the goals of the #Paris Agreement and limit the temperature rise to + 1.5 ° C, we need 📉 air traffic.

We talk about it with you this afternoon!

In fact, it is international flights that continue to be the largest CO2 emitters from air traffic in France. But “this cannot be a pretext for not regulating domestic flights for which less polluting alternatives exist or are possible,” insists Greenpeace, which recognizes “that banning short flights will not be enough.”