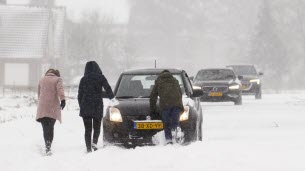 The Netherlands was hit by a heavy snowstorm on Sunday, the first in ten years, which disrupted road and rail traffic as a cold front swept across northern Europe.

Rail services were also affected in Germany, while across the North Sea, Britain braced for the arrival of this storm named “Darcy” by Dutch meteorologists.

“This is the first snowstorm (in the country) in a long time: the last … was in January 2010,” according to the weather forecast website Weer.nl.
The Dutch meteorological agency KNMI issued a “code red” alert across the country on Sunday due to winds that could reach 90 km / h and “icy”.

The Dutch government has closed all coronavirus testing centers for several days, due to the severity of the conditions, as the country expects to experience 10 days of freezing temperatures.

Most of the country was covered in 5 to 10 cm of snow on Sunday, but the white blanket was up to 30 cm thick in some places, according to public broadcaster NOS.

All trains were canceled in the country until at least Sunday noon, rail operator NS said.

Some 85 cars spun off the road after slipping in the snow, according to the Dutch Infrastructure Authority, which advises drivers to avoid driving.

A photo tweeted by local authorities even showed … a snowplow that had fallen into a ditch.

The cold wave hits Germany, Belgium and the United Kingdom

In Germany, snowfall caused major disruptions in train traffic in North Rhine-Westphalia (west), the most populous region in the country (18 million inhabitants), as well as in train traffic from Hamburg (north).

The snow has also caused significant delays in road traffic in this country, while since Saturday afternoon there have been 222 accidents, a police spokesman told DPA.

Up to 16 inches of snow was expected in parts of northern Germany overnight from Sunday to Monday, according to the DWD weather service.

Belgium, neighboring the Netherlands, was covered in a layer of light snow, but expected a sharp drop in temperatures next week.

In the UK, authorities have issued an orange weather alert for the south-east of England, due to potential snow-blocked roads and planned disruptions to road, rail and air transport.