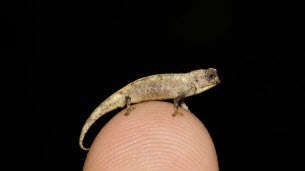 Its body has the same characteristics as its well-known chameleon cousins ​​but it fits on the tip of a finger: scientists have discovered the world’s smallest reptile in Madagascar, according to a recently published study.

“We discovered it in the mountains north of Madagascar,” at an altitude of around 1,300 meters, said Frank Glaw, head of herpetology at the Zoologische Staatssammlung in Munich.

A team of German and Malagasy scientists found two specimens during an expedition in 2012, but they were not known to be adult individuals, he said.

The female larger than the male

The male “Brookesia nana” is the smallest adult reptile in the world with just 13.5 millimeters from the snout to the base of the tail – the size of a peanut – and 22.5 mm including the tail.

The hemipenis (sex organ) of Brookesia nana is very large in proportion to its size. It measures 2.5 millimeters, or 18.5% of the animal’s length.

The female is significantly larger than the male, at 19.2 millimeters from the snout to the base of the tail and 28.9 millimeters including the tail, Frank Glaw details in the journal Scientific Reports.

These two specimens are still the only ones discovered for this species.

“There are many very small vertebrates in Madagascar, including the world’s smallest monkeys and some of the smallest frogs,” added Andolalao Rakotoarison of the University of Antananarivo in Madagascar, a co-author of the study.

But the microchameleons discovered are not the product of “island dwarfism,” the phenomenon whereby species on an island, similar to their continental ancestor, evolve over time by reducing their size, under pressure from various factors.

Madagascar hides treasures of biodiversity, but it is also one of the poorest countries in the world and its fauna and flora are not sufficiently protected.