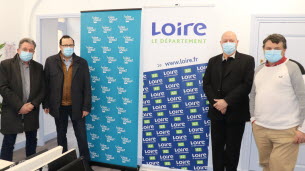 Installed in a renovated premises on the ground floor of the Loire Forez center, at 17 rue de Roanne, the France Services house represents a new model of access to public services for the inhabitants of the Pays d’Astrée in particular.

This community facility, the third in the Loire Forez area after Noirétable and Saint-Bonnet-le-Château, has just opened its doors to the public.

The president of Loire Forez Agglo, Christophe Bazile, accompanied by François Forchez in charge of social cohesion and François Mathevet in charge of the works and Serge Théberge, councilor of Boën on behalf of the mayor Pierre-Jean Rochette, visited the places and indicated that this third site benefited from the France Services label.

President Bazile explained in practice what France Services represents for the population: “It is a fair return of public service in the towns that need it, it is a service directed by trained personnel in various administrative fields. Boën’s site was selected because it is part of a strategy for networking the territory. In the municipalities furthest from a site, a traveling space is configured to avoid exclusion. “

On the Noirétable site in 2020, 27 requests were counted per day. The France Services service can be consulted in various areas such as family, social, health, work, retirement, housing, digital. The site is open Monday through Friday according to specific hours.