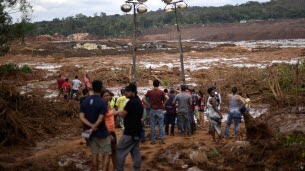 Brazilian conglomerate Vale announced on Thursday an agreement to pay more than $ 7 billion in “social and environmental” damages following the collapse of its Brumadinho mining dam, which killed 270 people in Brazil in January 2019.

“This agreement seals Vale’s commitment to pay full compensation for Brumadinho and support the development of Minas Gerais,” a state in southeastern Brazil affected by this disaster, the group said.

Authorities said it was the largest compensation agreement signed to date in Latin America.

However, they added that “the value (of the agreement) is an estimate” and “could be increased, if necessary.”

The rupture of the mine’s retention dam released millions of tons of tailings that engulfed an entire region of this mining state and caused a great ecological disaster.

Vale had previously been involved in another such tragedy in 2015 that left 19 people dead and caused unprecedented environmental damage in Brazil.

Almost 20% of the food wasted in the world