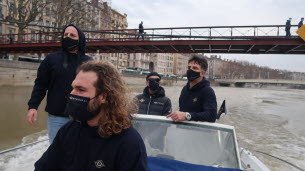 After having participated many times in the cleaning of the pier and the Rhône but also diving into the lake of the Tête d’Or Park to identify the species, Odysseus 3.1 was on the bridge this Thursday morning, in Confluence. Around Lionel Rard, president of the association, five members whose objective for the day was to go out to the Saone aboard the Arioste. “Last year, during a sharp rise in the water level, we noticed garbage cans in the water, ripped by the current. During this flood, we decided to see if any changes had been made and, if necessary, collect any trash that we could find in the water. And depending on the case, give the information to the Metropolis, whose governance has changed since last June. It is up to us, environmental protection associations, to point out what is wrong ”. A journey that doesn’t stop there. Being located in the middle of the water, it is easier to observe possible sources of contamination. And using goofs, harvest what’s on the surface

The exit from the dock is slow, because of the current. The ascent to the Koening Bridge goes smoothly, the boat gliding between the great branches that descend from the Saone. However, disappointment. The water is too high and most of the containers are under water. The three who seem flushed with fright. “Two days ago they were still showing up,” explains Lionel Bard. “But there, the water rose too fast. And with the current flow of 1700m2 per second, against 400 m2 per second in normal times, little waste is seen ”.

Prevents. The arrival of the Ariosto boat, offered by a skipper, is a real plus for the organization. “With her 205 hp, the boat allows us to scout like today, but also to clean. So we can transform ourselves into an ecological patrol and continue our awareness-raising work among Lyonnais ”, he concludes.