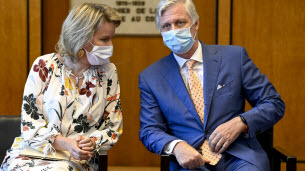 The granting of a building license to the King of the Belgians for a 40 m2 premises in a natural setting arouses controversy on the island of Yeu: a “scandalous privilege” denounces the opposition, “unhealthy jealousy” replies the mayor.

Filed in March 2020, under an assumed name (Mr. and Mrs. Legrand) for reasons of discretion, the building permit application refers to the construction of an “annex to exclusively house the security services necessary for the protection of a head of state, “according to Mayor Bruno Noury ​​(several on the right).

The mayor points out “exceptions”

It was awarded in August 2020, after five months of instruction. “You can imagine that I did not do this alone,” explains Bruno Noury, who says he “consulted state services” about the possibility of an exemption to build in this remarkable wooded area.

The local urban planning plan (PLU) “provides for exceptions with respect to collective facilities of general interest, especially in terms of security, and this is the case,” confirmed the Vendee prefecture.

The municipal opposition M’Yeu Ensemble denounces it as a “scandalous privilege”. “Is it enough to be ‘Majesty’ to transgress the Law and freely specify our natural heritage with the complicity of the authorities?” Asked elected officials on their Facebook page.

The opposition leader Patrice Bernard (various rights) assured, during the municipal council of January 26, that the project should have “been the subject of a deliberation or approval in commission of the sites.” “In a natural area, in a registered site, in an area near the coast, this is the procedure,” he added. “They imposed it on us,” the mayor later replied.

This is not Putin’s palace

With AFP, Bruno Noury ​​assured to be “in the legality since the PLU allowed it although it is a very particular situation”.
A spokesman for the Royal Palace of Belgium confirmed that a building permit had been obtained “in due form, in accordance with the regulations”.

The Kings, who have visited the island every summer for the last twenty years, acquired this approximately 7,000 m2 piece of land in 2019, in order to renovate the 200m² house there. “This is not Putin’s palace,” the mayor noted. “The king comes here with all discretion. He can go and buy his bread without anyone else doing it,” he described, and said he regretted “unhealthy jealousy that does not increase the island of Yeu.”