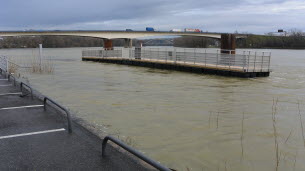 The rise in the waters of the Rhone in recent days was a sign of overflows. A situation that forced the City Council to prohibit access to certain car parks.

If the situation has partially stabilized and the decree has undoubtedly been lifted, vigilance remains, particularly with regard to the Saona, which continues to rise. “At the beginning of the week, the flows were around 3700-3800 cubic meters per second (m³ / s). The high threshold seems to have been reached on Tuesday, February 2, around 11 pm, with 3,793 m³ / s. Since then, the curve has dropped a bit, ”says Quentin Pechoux, head of communications at the CNR (Compagnie Nationale du Rhône). “A situation that is obviously changing according to weather conditions and the highly fluctuating snowfall limit,” adds the manager.

On closer inspection, every second that passes you see the equivalent of more than one Olympic size swimming pool.