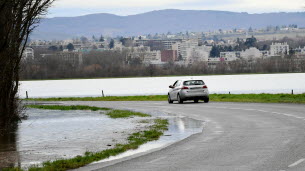 Wednesday was still very humid in the Ain as in the rest of the country.

A period of rain “largely in excess,” says Christophe Mertz, forecaster for Météonews. Thursday February 4 was going to be “drier”, before a weekend and even the next fortnight again rainy but in less quantity than this week.

No snow on the horizon, due to mild temperatures.